It was a day like any other, except that it was the day before my expected due date.

Friday morning, August 3, 2018, I woke up and felt nothing out of the ordinary.  I was larger than I’d ever been in my life, at 39 weeks and 6 days gestation, yet was oddly comfortable despite the common, random twinges of pulls and cramps.  Not sure what made me blurt it out, but I turned to my husband in bed and said “don’t go into work today”.  He looked at me with a bit of worry (having never before been through this childbirth process), and replied, “are we having this baby today?”.  I admitted that I didn’t feel any different than I had in the months leading up to the day, but that I just didn’t want him to leave me.  He obliged, excited to spend the day playing video games while we waited to see what the day had in store for us.

We laid in bed for a little while, fully knowing that this would likely be our last lazy morning for a good while.  When my husband started getting antsy and motioning for the day to begin, I pulled him back and giggled as we playfully tussled.  He gave in, so not to cause me to overdo it, and exclaimed, “babe, stop, you’re going to make me make the baby come!”  I laughed it off, until I brought myself to sitting position and felt a discharge I’ve never experienced before.

I shot up off the bed and waddled to the bathroom.  All the while my husband was frantically grumbling, “oh my God, I told you, what did I say?  Did your water just break?  Where’s our s**t?  I’ll get the bags.  We should call the hospital.”  I had packed our bags a few days before, when I felt all nesty and stuff.  I knew we were ready and, in all honesty, I wasn’t in any pain, so my zen demeanor completely contrasted his rattled self tenfold.  We called the hospital and were on our way in for a check-up.  It was just my luck that my OBGYN was on call that weekend, and would be the one to deliver my baby if it really was go time.

It was 10:00 a.m. when we rolled up to the hospital.  We parked and I walked in feeling great.  As we’re walking to the elevator, my husband asks, “shouldn’t you be in pain or anything?  You seem fine?”  I shrugged my shoulders because I don’t know?  I was just as new to this as he was.  My OB took one look at me and said, “you’re not experiencing contractions yet, are you?”  Nope, not one bit.  She checked me to see where I was at, and I was 4 cm dilated and 100% effaced.  This baby was coming soon, we just had to wait for the labour to start naturally.  We didn’t know the baby’s gender, which I think made it all the more exciting and less nerve-wracking.

I didn’t have a birth plan.  I knew I wanted to be in a hospital (because I’m OCD and would absolutely hate the set-up and clean-up required for home-births and I also loved having the ease of mind knowing that knowledgeable and exceptional help was just a push of a button away).

Other than that, I had no plan.  If drugs were an option, I’d take it, and if they weren’t, it would have been equally as fine.  Having a nonchalant attitude at this point in my life was probably the best thing I could have had for myself.  What was the point in getting hung up on sticking to a plan?  If anything arises as the process goes on, you handle it the way you would anything else in life.  Assess the situation, figure out the solution and move forward to resolution.

The contractions start… as the noodles arrive

We had the option of staying at the hospital and walking around until the labour started, or we could go home and wait it out.  Home was much more appealing, and so we left.  My father, who had just come into town, called just as we were leaving and asked us to go for a family lunch at a pho place just down the road.  Pretending like it was business as usual, we pulled up to the restaurant and kept our status a secret.  Just as we finished ordering the food, my face went blank.  My brother who was sitting across the table from me quickly asked, “hey, Sash, are you ok?  Are you about to have this baby?”  It took all of my might not to throw up.  I was having the first real contraction.  I played it cool, and said, “oh, it’s probably just Braxton Hicks… the warm up to the real thing, it’s fine.”  I watched the time to make sure they weren’t coming consistently.  They weren’t, but I don’t think I’ve ever finished a noodle bowl so fast in my life.  I needed to get out of there and back to either home or the hospital.  Doing our best to keep it all on the down low, we parted ways and told them we’d keep them posted on baby watch.

We reached home by 2:00 p.m. and I decided to take a nap (very out of the ordinary for me, as someone who absolutely hates napping).  My body was telling me to rest, so I did.  3.5 hours later, I woke up in excruciating pain.  This baby was coming!  Contractions were 7 minutes apart and stronger than ever before.  I knew of the 4-1-1 rule, how we needed to wait to go to the hospital until the contractions were 4 minutes apart, 1 minute long for 1 hour, but I’d been 5 minutes apart for 2 hours and could feel the baby dropping by the hour.  The only relief I found was when I was in a half-fold, elbows on the staircase and prayer over, behind my head, breathing deeply.  This was probably the only time I was aggravated with my husband, as the background soundtrack to my breath and moans was his goddamn virtual car racing through the streets of San Andreas.

The real deal… time for hospital

Even still, I was oddly calm.  I told him to quit it and we called it.  We hopped back in the car and drove to the hospital.  This time around, it was the real deal.  I was gripping on to the dash, the holy-shit handles and my husband’s arm the whole way back to the hospital.  We parked and he had to bring me in in a wheelchair, because walking was intense.

It was straight up and in to the anesthesiologist’s room for the epidural for me.  That needle was more uncomfortable than anything.  Especially brutal that it didn’t take the first time round.  Everything was numb except for my abdomen… the one area you want to be numb.  I did get a little upset that I had lost all sensation, as part of me really wanted to experience childbirth naturally.  But what was done was done, and I had moved on even before I had a chance to complain.  I needed to push, but my water still hadn’t broken.  My OB came in to check up on me and I was 9 cm dilated.  She casually said to me, “I’ve got to deliver another baby in the next room, so you’ll have to wait a little bit.  Don’t worry, the nurse here will help you through majority of this, so you’re in good hands for the time being.”

By this time, it was 10:00 p.m.  My water still hadn’t broken, I was feeling like I needed to push and my OB was still delivering another baby.  Just when I started feeling like I couldn’t handle waiting anymore, we heard a brand new baby cry from the room next door.  That put me at ease, knowing that my OB was going to be back soon.  True enough, she was.  She slapped on her glove, just as all doctors do in the movies and said, “alright nurse, get me the hook.  We’ve got to break her water.”  My eyeballs bulged out of my eyes as I turned to my husband and wearily asked, “the hook?!”  Only then to hear my OB say, “oh, nevermind….” *splat*.  She just had to poke it with her finger.  My husband was not prepared for that and I legitimately laughed out loud saying, “oh my God, was that my water breaking?”  Yes, yes it was.

My beautiful baby boy is here

It was time to push.  It was midnight by then.  We waited until I was 11 cm dilated, so that I didn’t have to push for too long.  That is the exhausting part.  The part that took it all out of me.  None of my deep yoga breathing was helping me through this part.  This is when you breath deep, and hold it and push with everything you’ve got.  This is when people poop the table, or have blood vessels burst in their eyes.  Thankfully neither of these things happened to me, but damn did I feel like I was close to it.  We did the push and simmer method suggested by my OB, to keep damage to a minimum.  She’d say, “push push push push push… STOP.” and I’d listen and obey.  She said it 4 times in total, and out came my baby without any tearing.  My beautiful baby boy.  One minute before 1 a.m.  He was such a surprise, as my instincts were wrong the whole time in thinking I was host to a baby girl.  He was 8 lbs 12 oz, and much more pink than I imagined my baby would be.  He was and is healthy and strong, which was all that I could ask for.  My beautiful baby boy, how he continues to surprise me every single day since. 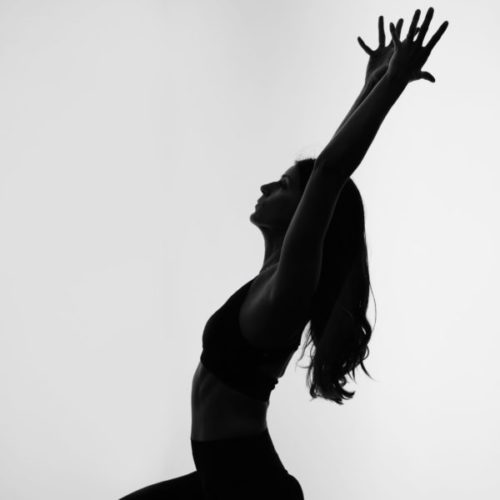 My aim is to share the incredible benefits of yoga with as many people as possible. It’s had such an amazing impact on my life, shifting my outlook and making me happy, healthy and calm.

Let me help and inspire you.